The Culture of Le Marche 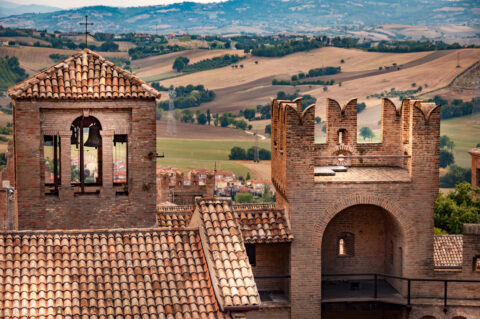 Upon seeing the walled, fairytale-like fortress, you will know that are approaching Gradara Castle (Castello di Gradara).  Nestled in the hills of northern Le Marche where it brushes up to Emiglia Romagna, this imposing structure is one of the best preserved and striking castles in the whole of Italy.

Situated at 142 metres above sea level, with the Republic of San Marino, Rimini and Carpegna in the background, Gradara Castle and surrounding village represents an extraordinary urban and architectural combination. Furthermore, its imposing 14th century walls are some of the best-preserved, medieval, defensive walls within the region; the walls, themselves forming a walkway, where one can see the interesting structure and take in the pretty panoramas.

This eponymous and noble castle is also one of Italy’s most magical and fascinating; a visit will transport you back to the Middle Ages and Dante’s Divine Comedy.  For as classical scholars may recall, it was within these castle walls that the star-crossed lovers of Paolo and Francesca met their tragic end; Paolo and Francesca themselves becoming immortalised by the fifth canto of the Divine Comedy, with their tale, to some, turning the castle into a symbol of love.

In fact, beyond this love-lorn tale, long-told centuries of history can be experienced in the stunning walled hamlet of Gradara itself, the castle being at its peak with its skyline enhanced by the age-old battlements. Particularly enchanting is the view of fortress and underlying, historical village at night.