There is a very special lake in the beautiful, Sibillini mountains:  For there in an obscure, quasi-backwater, Apennine Edelweiss, Saxifraga and the beautiful yellow Apennine poppy grow. That alone would make it an area of naturalistic interest, especially given the magical, spectacular setting in which these rare species flower.

But then one learns of the exceedingly rare Chirocephalus Marchesonii, a fairy shrimp endemic to the lake. In fact, there are testimonies that this lake is the only known place where they can be found – the widely-held belief being that the very existence of these crustaceans is due to the lake’s specific, climatic properties.

The lake is Lago di Pilato (Pilate’s Lake) and one cannot help but also acknowledge the folklore that surrounds it – for shrouded in ancient folklore it surely is.

Over the years, the lake – which ‘eerily’ changes shape continuously-  became known as a strange, mysterious place where many feared to go.  This was essentially stemming from the legend of Pontius Pilot and the ardent belief that his body lies submerged at the base of the deep, dark lake. Weirdly, it thereby led to the absorption of Pagan traditions being entwined with Christianity itself – and to the name by which the lake became known.

Legend also has it that over a thousand magicians and soothsayers visited the lake believing that its supernatural powers would enable their magic books to work.  However, such pilgrimages aroused fear in some of the local inhabitants.

Did the Franciscan Friars really walk from one Sibillini mountain village to another fearful of the lake? There were hushed whispers that in the caves within the mountains, dark characters – who were allies of the devil – were hidden.  This rumour was further fuelled by the tales of the Sibyls/’old hags’, said to have resided in the mountains after Christianity had driven them out of their grottoes close to Naples – the very existence of these hags spawning many a legend in their own right.

Folklore aside, the lake, as it ‘magically’ glistens’, twinkling in the morning mist, attracts visitors, climate change enthusiasts and necro-romantics alike – folk entranced by the lake and its enduring presence.

A device that detects body temperatures, the presence of face masks (where applicable) and sanitises both hands and feet/shoes making all businesses/institutions safe.  A highly technological device produced with a chassis in material that can be illuminated from the inside and is clearly visible at night.

For every device sold, a new tree will be planted in the “SprayForLife” forest. 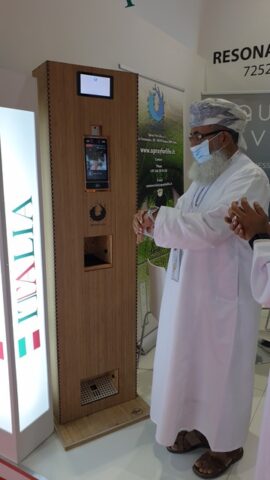