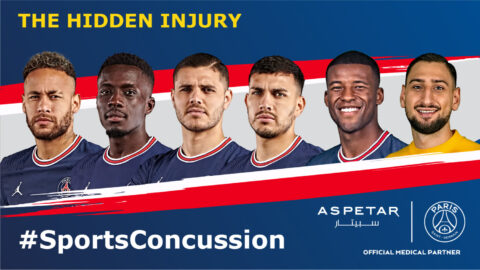 The Concussion in Sports campaign has had an extraordinary level of engagement and has contributed to the awareness of the issue of concussion among footballers, seeing a lot more interaction between interested people and specialists in sports and medicine fields.

Aspetar Orthopaedic and Sports Medicine Hospital and Paris Saint-Germain football club (PSG) have joined forces to launch a series of videos on concussion. The videos feature the French football stars and are part of a joint awareness campaign to encourage a healthy and safe environment amidst players.

Despite the quite specific nature of the topic, the campaign has reached a wider audience, with the participation of the stars of Paris Saint-Germain and Aspetar experts. The campaign had been running for two months from March to May to help raise awareness of concussions in football and promote ways to manage them correctly on the field.

Based on international best practice, the campaign includes raising awareness, educating players and medical personnel, facilitating early recognition and treatment of concussions, and referral into a specialist referral network and advanced sports concussion clinics. In the interest of athlete well-being, Aspetar is committed to conducting research on such subjects and taking the initiative to provide evidence-based care.

Dr Louis Holtzhausen AspetarSports Medicine Physician said: “The aim of the campaign is to raise awareness amongst the football community on the importance of prevention of complications of concussion, how to avoid such kinds of injuries, how to deal with it during a match and training sessions, and also to share knowledge among the football community and fans about it.”

The videos were produced for the initiative through close collaboration between Aspetar and PSG and features the football stars asking questions and delivering friendly messages in their local languages, with Aspetar experts responding to their queries. The videos were released on the social media channels of Aspetar and PSG.

One of the short videos shows a PSG player querying why everyone is making such a fuss about concussion these days when footballers have always received knocks to the head from time to time in their career, and nothing seems to happen. The experts reply:” This is because medical science recently figured out that concussion is a very complex brain injury with serious after-effects if it is not treated correctly, like long term mood disturbances such as depression, or problems with memory and concentration, almost like Alzheimer disease”. Furthermore, the Aspetar expert stresses the short- and long-term complications, influence on performance, and risk of re-injury or other injuries.

Aspetar has launched a unique sports programme to look into concussions in football players – the first of its kind in the Gulf region – and is committed to providing world-class concussion care to football players, as well as contributing to the legacy of the FIFA World Cup Qatar 2022.

FIFA has made it clear in a statement that it aims to give priority to this matter in the interest of player welfare and aims to support the use of the FIFA rule which makes it possible to replace those who suffer a concussion, regardless of if a team has already used up its maximum substitutions.

Aspetar is a world-leading specialised orthopaedic and sports medicine hospital and the first of its kind in the Middle East. Since 2007, with a world expert team, the hospital has provided top-level comprehensive medical treatment to all athletes in a state-of-the-art facility that sets new standards internationally.

In 2009, Aspetar was accredited as a “FIFA Medical Centre of Excellence” by F-MARC. In 2013, Aspetar was adopted as a reference collaborator centre by the Gulf Countries Council (GCC) Health Ministers Council and “IOC Research Centre for Prevention of Injury and Protection of Athlete Health” in 2014.

In 2015, Aspetar has been recognised as the “IHF Reference Centre for Athlete and Referee Health”. In the same year, the hospital also achieved the obtained-on December 15 the Accreditation Canada International (ACI) “Platinum Level”. In 2018, Aspetar was also awarded the Diamond Level Status.